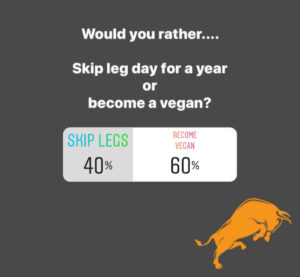 -> Keith O’Malley-Farrell
Just for fun, in a recent post on my Instagram story I asked…
“Would you rather… Skip leg day for a year or become vegan?”
Lots of direct messages but the final result was 60% become vegan & 40% skip leg day.
I’m not sure if that’s because people love veganism more than they leg day, or if people had to give up one of the two, they would rather give meat that stop training legs.
One of the direct messages I got, (aside from quite a few stressing how difficult the choice is) states that the person would rather jump off a bridge than skip legs, and veganism is not far off.
I think personally I would rather skip leg day for a year because from my basic knowledge of nutrition and physiology, the benefits I would miss out on for skipping legs would be more easily rectified once the year is up.
While veganism works wonders for lots of people looking for their own natural progression deeper into a healthy lifestyle, for me I have no trouble with digesting meat, red meat, fish, poultry you name it. We all know at least one person who reports feeling a ton better after switching to a plant based diet and see their body composition improvements to demonstrate that.
For me, I have always eaten meat, and I’m one of those people who think if there’s no meat in a meal then it’s not a real meal, it’s only a snack. I eat meat whenever I can & so far through my 33 years I’ve not had a problem with high quality/low quality meat.
So…. to regain the nutritional benefits and potential physiological imbalance that my body may suffer from having no meat would in my opinion be a far greater mountain to climb than getting back under a bar or onto a leg press and repping out leg day.
Also the thought of being put into the stereotype that some extreme vegans have created and being difficult to be around during an omnivore’s meal time is a big enough deterrent to never give up meat.
I don’t think I’m amidst the population and I do think it’s unfortunate that that stereotype is putting people off from joining their “plant-based” team.
I’d rather skip leg day.
Scroll to Top